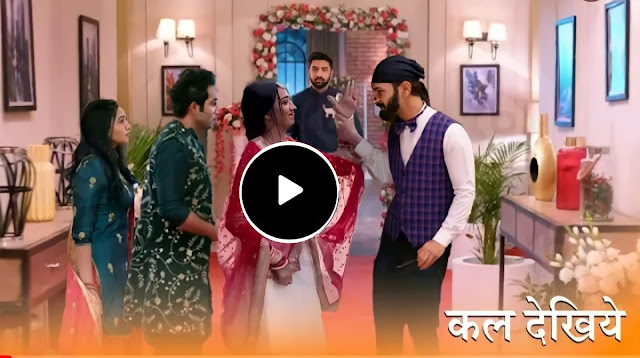 Episode start when Anupama’s vidaayi ritual starts. Samar, Toshu, and Pakhi at once deliver a film dialogue Jao mummy jao jeelo apni zindagi. Anuj dances with Anupama and others on Jag Ghoomeya Thare Jaisa Na Koi… song. Anuj offers slippers to Anupama, recalling their first meeting. Samar and Toshu say their love story started similarly and even their married life. Anupama performs the vidaai ritual and prays tulsi plant before leaving the house. Serial’s title track plays in the background. She then leaves in a car with Anuj teary eyed.

Anuj comforts Anupama and says he likes all the rituals of marriage except vidaayi ritual as its the only ritual which a bride cannot follow with a smile. He says girls leave behind their parents, but she left her babuji, baa, children, etc. Anupaama says along with tears, girl would be having a dream of spending a life with her husband and beautiful life ahead, etc..

Vanraj prays for Anupama’s happy life ahead and thinks he needs to take care of his house from hereon as Kavya would be take care of herself; he needs to follow both mother and father’s duty towards his children, parents, and Mamaji.

Vanraj thinks he needs to take care of Bapuji’s medications and doctor’s appointments, Kinjal multivitamins, pakhi’s studies, etc., and thinks women manage so easily, how will he. Anuj takes Anupama to his parent’s house and surprises her. She surprised says he didn’t inform her about it before. He says he had given it to mukku and hence didnt’ speak about it. He reminds her that he .

had told during her first visit to his flat that he stays in a small flat as he is afraid of loneliness in a big house. He says he grew up in this house and dreamt since 27 years to bring her in this house, now he has returned to this house after 27 years with her to build new memories with her, etc. Anupama thanks him for bringing her to their house. He opens the door.

In the next scene Anupama rejoices seeing the new house. GK, Devika, and Shahs welcomes her with aarti and perform her graha pravesh ritual. Anupama insists that Anuj also perform ritual with her and walks in holding his hand. Prem Ratan Dhan Payo.. song plays in the background. They both then pray Kanhaji emotionally.

What will happen in the next episode just visit our site.