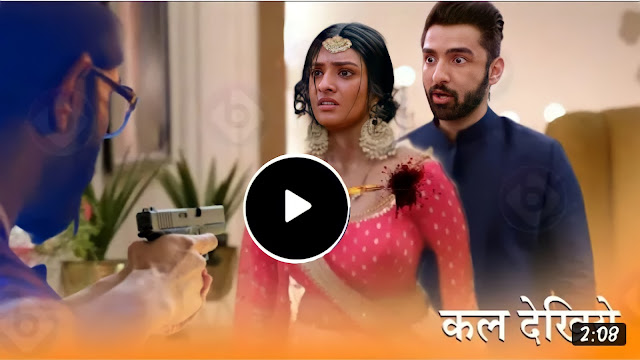 We are here with your favourite show Yeh Rishta Kya Kehlata Hai.

The Episode starts with Akshu saying sorry, we started without you, you didn’t miss much. Abhi sees the cake and recalls his childhood. Akshu smiles. The guests congratulate Harsh and Manjiri. Harsh introduces Manjiri to the investors. He says she is a homemaker.

Akshu asks how did you like my arrangements, is the surprise good. She asks Harsh and Manjiri to cut the cake. Harsh says you didn’t stop your bahu from doing this drama, see what I do now. Akshu looks at them.

They cut the cake. Vansh asks Harsh and Manjiri to feed each other. Harsh says I don’t like it, its not good for health. Abhi goes to Manjiri. She signs no. Abhi feeds the cake to Manjiri. He eats a piece of cake. Everyone looks on. The guest says we should leave now. Anand says no way, food and drinks are arranged,lets proceed there. He takes the guests. Harsh goes. Manjiri thanks Akshu.

She says I m sorry from his side. Kairav says Akshu was trying to give happiness to uncle and aunty. Abhi takes Manjiri with him. Aarohi asks what’s the need for her to have family goals. Mahima asks is Harsh mad to do this, what will investors think

Abhi says I can’t see your tears, Harsh is always the same, he doesn’t care for you. Manjiri says we can’t spoil others’ mood, the guests are there and also Goenkas, promise me, you won’t get angry on Akshu, she doesn’t know. He says she should have asked me. She says Akshu doesn’t know all this. She goes.

Abhi says this would have not happened if… Akshu stops Harsh. She says really sorry, I have done that with a good intention, I got a chance to celebrate parents anniversary for the first time, so I got excited, you got more hurt, I don’t know why, sorry, don’t spoil your mood, everyone is waiting, I promise, there is no surprise, just dinner. He says I don’t care, this anniversary and party can go to hell. Akshu cries.

In next episode we see that Jaaniye….plays… He gets up. She holds him and says everyone wants to take me home with them for pagphere. Abhi says yes, go. She says please Abhi. He says go if you want. He moves ahead, and his shirt gets off.

She says I know you don’t want me to go, if we don’t say love thing with love, then a lot shatters, relations, trust, friendship and love. She picks the shirt buttons. Tujhse naraaz….plays… She sees their tickets to Chicago. She cries and leaves. He feels sad.

What will happen in the next episode just visit our site.