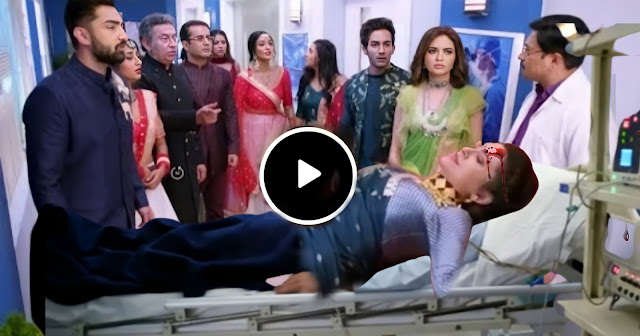 We are back with another update of your Favourite show Bhagya Lakshmi in the next scene we see that when Neelam comes there and asks where is Rishi and Malishka? Kiran says Rishi is here, but where is Malishka. They see Lakshmi and Malishka coming downstairs wearing the same color and designs lehenga. Neelam asks what is this? Malishka says Lakshmi wanted to dance, and seeing her excitement, even I want to dance to make this night memorable. Lakshmi and Malishka start dancing. They dance with Rishi.

Just as the dance ends, Malishka falls on the table. Lakshmi keeps her hand on the table to save Malishka. Everyone gets worried for Malishka, including Rishi and takes her from there. Bani is about to go behind Lakshmi, but Rano stops her and tells that the injury is more deeper than it appears. Bani asks why she is acting good. Rano says she is thinking about her betterment. Lakshmi goes to her room and locks the door. Balwinder looks at Lakshmi and tells Bobby that he didn’t see her beauty before, else would have married her. He says now he will marry her. Shalu comes there and knocks on the door. Lakshmi cries in the room and cries thinking about Rishi’s care for her. Shalu asks her to open the door. Lakshmi cries.

In the next scene wee see that

Kiran applies spray on Malishka’s leg. Malishka says she is fine and doesn’t like the spray. Rishi tells that his coflin is missing and says he will go and check it. Malishka tells that Rishi came running to her and was like before. Sonia says she didn’t see Lakshmi’s injury and ran to Malishka. Kiran says everyone was with Malishka and not with Lakshmi. Lakshmi thinks he is not her Rishi, and thinks how he can be stone hearted? Neelam says Rishi is stressed, may be due to the business deal. She tells Malishka that if she is comfortable then shall complete the engagement ritual.