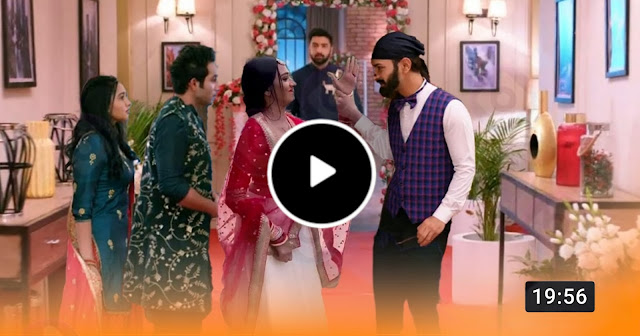 We are backe with another update. Here we are going to update you that.

In the next scene we see that Kiran applies spray on Malishka’s leg. Malishka says she is fine and doesn’t like the spray. Rishi tells that his coflin is missing and says he will go and check it. Malishka tells that Rishi came running to her and was like before. Sonia says she didn’t see Lakshmi’s injury and ran to Malishka.

Kiran says everyone was with Malishka and not with Lakshmi. Lakshmi thinks he is not her Rishi, and thinks how he can be stone hearted? Neelam says Rishi is stressed, may be due to the business deal. She tells Malishka that if she is comfortable then shall complete the engagement ritual. Malishka says she is perfectly fine. Lakshmi cries and says she .

wants to hold him and stop him from getting engaged, and says you will not agree, you are acting as if I am a stranger and doesn’t exist. She says if I ask you not to do this engagement then you will ask me who am I? Rishi knocks on the door. Lakshmi says Shalu, let me be alone for sometime. Rishi says I am here, and asks her to open the door. Lakshmi says she was wrong, he came to ask if she is hurt. She opens the door and looks at him. He asks her to give him side, and goes inside the room.

Shalu and Ayush look at each other. Shalu says I don’t want to talk to you before, but you wanted to talk. She says we were angry, but calm as we know that you all realize your mistake.
She tells Ayush that he is completely changed and seeing everything wrong. Ayush says if Lakshmi is happy and dancing, then why this is wrong. Shalu asks who are you, and says one day you came to drop me and Lakshmi di called and asked you if you reached safely, you had said that even your mom don’t care for you so much. She says I didn’t like you at first, but then started liking you, as you cared for di, but not anymore. Rishi goes from the room. He then brings the first aid box and sits beside Lakshmi.
He cleans her injury and applies ointment to her. Lakshmi thinks why you can’t feel what I mean to you, I want to hug you and don’t want to get separated for you till many births. Malishka comes there and gets upset seeing him caring for Lakshmi. Will Lakshmi be able to stop rishi from getting engage to Malishka? To know more update wait for the next article.